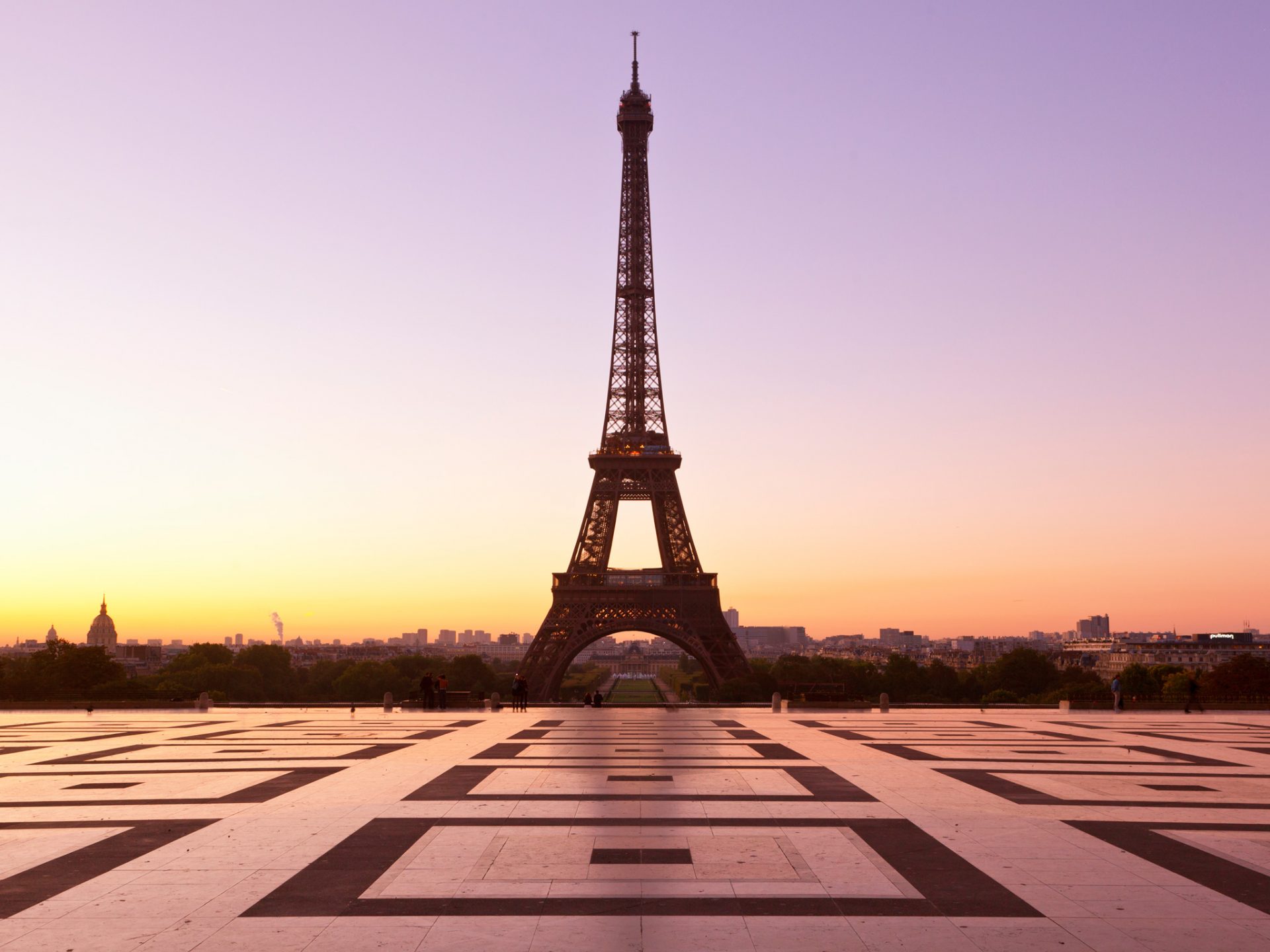 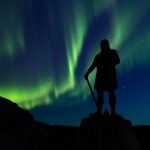 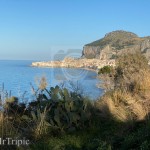 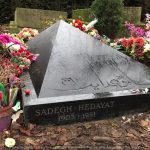 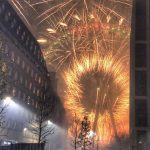 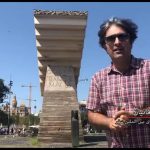 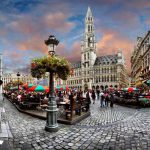 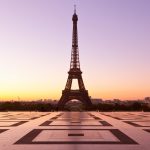 “If you are a Paris journeyer ” the article, is a result of my frequent sojourns and trips to Paris. I have tried, firstly, to note my cognitions of this city in several different categories including “what you will perceive in Paris”, “what you should think of” and ultimately, “what you must experience” , and secondly, to put the maps which I had, so if someone is an outlook traveller of this city, they will be able to project their trip in a superior way by studying this subject. I will update this item gradually based on my fresh experiences, so that it will be more thorough with the passage of time. I would be delighted if any of you friends who has traveled to Paris, perfects this topic in the comments.

1- What you will perceive in Paris

– If you are a smoker and you exhibit your pack of cigarettes, it will transpire repeatedly that Frenchs will request for a cigarette. It will suffice even as an experience to put a pack of cigarettes on your café table in a crowded Paris street to see this issue.
– When Frenchs head for restaurants , only God knows until when they would sit there. They are not in haste to depart from it.
– They smoke abundantly. They are accustomed to smoke often in the middle of the repast.
– There are lots of bakeries and confectioneries in Paris that carry excellent sweets. The similar example in Iran can be the confectionery in Enghelab street, in the corner of Vesal street.
– There is a vast number of people with headphones on their ears in Paris especially in the subway.
– Most of the extrinsic public walls, there with copious pavements are covered in graffiti.

2- What you will perceive in Paris

– Subway’s working hours are up to the midnight. However, night buses work till the morning.
– You can find second or third rate, 24 – hours restaurants in all the districts which are open till the morning and will be of use in case of late hunger.
– Akin Amsterdam and Hamburg, Paris has got a red light district too.
– There are several elevated locations to observe Paris from above. The most northern ones are Montmartre altitudes, opposite of the Basilica of sacred hearts. But it’s remote from proverbial attractions. In the central city there are Notre – Dame cathedral ‘s steeples which have the prime perspective in my opinion. Top of the Centre Georges Pompidou and over one of the tripartite buildings of the Galeries Lafayette are also from the following Paris observation locations. Slightly inclined towards south west in the center, there is Eiffel tower that a reasonable contour is seen from it’s top, but your image lacks Eiffel ‘s facing, itself. Finally in the southern half of the city is located Montparnasse tower that you can picture decent shots with a quality camera.
– If you don’t want your photographs of the city from the forgoing elevations to be against the light, you visitation from Montmartre should be in the morning, from Montparnasse and Notre – Dame in the afternoon and Eiffel tower in the evening.
– Chatelet, Rivoli, Haussmann Boulevard, Opera Avenue and Montmartre quarter environs are touristic, traveled and charming locales to book and stay. In the meridional part of the Saint river, Saint -Germain sphere has a nice situation.
– There are lots of dance clubs in Arc De Triomphe and Champs-Elysses Avenue areas. Most of the Parisians know the Duplex club and recapture it nicely.
– Chatelet locality ‘s restaurants are quality points for gala dinners. There is hookah for eagers too. A dinner in Sebastopol Boulevard’s purlieus and also a serving Montmartre quarter would be engaging and memorable.
– Paris has two kinds of intracity train. One is Metro which is called Metropolitain and it’s tracks are simple available in the central environs of the city. The other one is called RER that is pronounced as [ علائم به صورت دستی انتقال خواهند یافت ] by Frenchs. RER’s traffic rang is overly widespread and has access to Paris’s suburbs. These trains’ fare is more than Metro. In order to use RER, you have to hold the ticket until the departure, otherwise you can’t exit the station without it.
– Paris has a range of  subway tickets. One is based on the zones and there are tickets to use in one, two or three zones. Also based on the number of the trips that single trip, two trip, five trip, ten trip and twenty trip tickets are available. Besides, there are tickets to use, based on the exploitation’s time period from one day up to five day. The round train ticket from Charles De Gaulle airport to the northern train station in Paris, singly costs 18€. So if you are intended to stay in Paris for five days and you are going to transport from or to the airport by the subway, you ought to purchase a five zone five day ticket which costs about 53 euros and you can use it dearly and limitlessly ( this ticket covers Metro and RER jointly ) for all the positions of the city ( the airport, Disney Land, the funicular, bus, intracity trains and etc ). Otherwise, ten trip tickets which are expressly to use in Metro are more convenient. Remember, when ever you buy the timewise tickets, your time starts from the morning of the utilization day, so you had better not buy the ticket at night.
– Typical maps of Paris are not composed of details you are not able to see the name of the side streets therein. However, there is a major map of the same sphere in all of the stations. These types of maps are also available in many traveled streets with a sign showing your halting point.
– Exploring Eiffel tower requires minimum four hours considering the queue, two stoppages in the middle of the tower and the time which you spend visiting ( in summer ).
– Visiting the tops of Notre – Dame’s steeples takes approximately one to two hours having the line, scaling and scheduled waiting, taken.
– You should book ballet and Opera programs a few weeks before. The saloon will be full or costly in the approaching nights. However, the tickets of Moulin Rouge and Lido cabarets are easier to find.
– Unlike the primative imagination, prices are tolerable in some Champs-Elysses’s outlets. Although, Rivoli is the best high street.
– There are many overnight Paris tours. Walking tours, biking tours, private car tours, city excursions by bus, boat excursions and etc are some of them.
– Paris’s summer, especially September, is one of the most crowded times in Paris and accordingly everything is more expensive.
– There are twelve streets diverging from Arc De Triomphe and Champs-Elysses is one of them yet. Etoile ( star ) is one of them.

3- What you must experience

– Creme Brulee dessert is an imprative to have.
– Instead of rushing towards Eiffel tower to see it, first begin from the Trocadero station on the other side of the Seine river. You will see a unique view of Eiffel.
– Be present in Louvre museum to visit,  before nine in the morning so that you will meet a shorter queue and the museum will be more quiet. First go for the Mona Lisa’s portrait because it becomes crowded rapidly in the very first moments of the museum’s working hours.
– Visit viparis.fr before the journey, observe ongoing Paris events. Some of them are worth slight changes in your itinerary.
– Don’t miss a lunch in Montmartre quarter beside the Basilica of the Sacred Hearts and the Painter square, a lunch or dinner in the Abesses station’s purlieus in the same quarter, a dinner in Chatelet’s purlieus and the Sebastopol street.
– Plan for all of your days in Paris before you set off,  it’s a shame to spend your time in Paris on searching.
– There are two significant and well-known cafés in the Saint – Germain street which enacted during the formation of French historical actions and events through the presence of distinguished personalities. It’s a sensational experience to drink a  coffee with a French preparation approach ( French coffee ) in one of the Flore or Deux Magots  cafés.

My strict suggestion – if you have enough time – is to tramp exactly according to these routs in Paris. You will see many of the beautys in Paris which you have seen in the pictures. 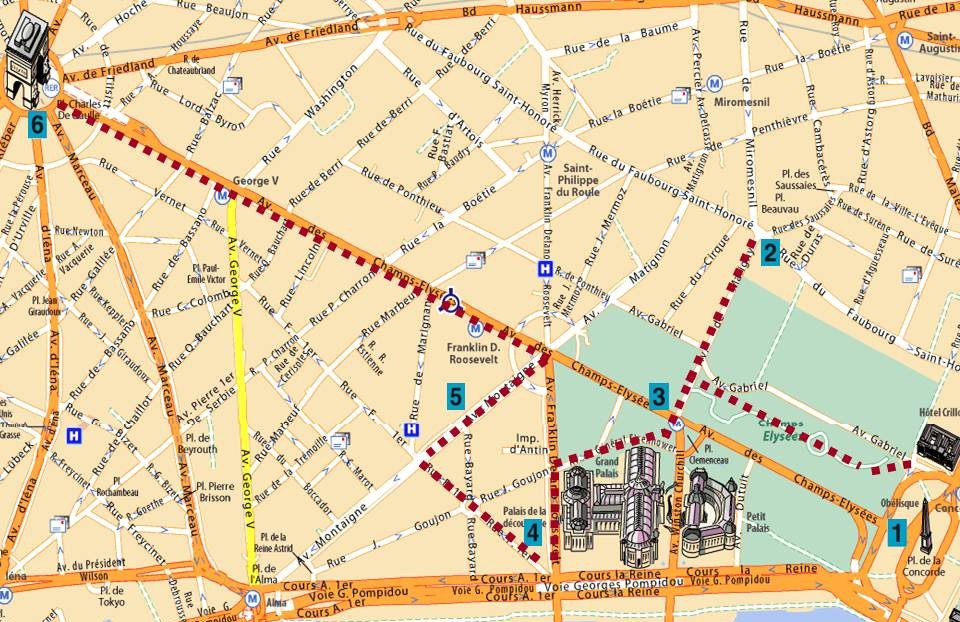 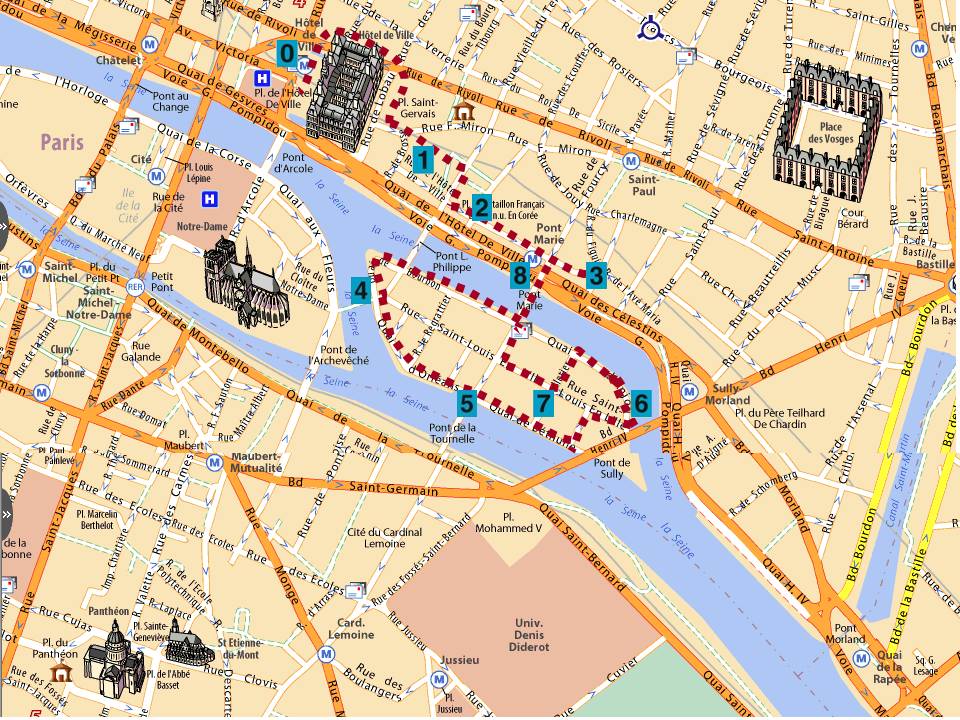 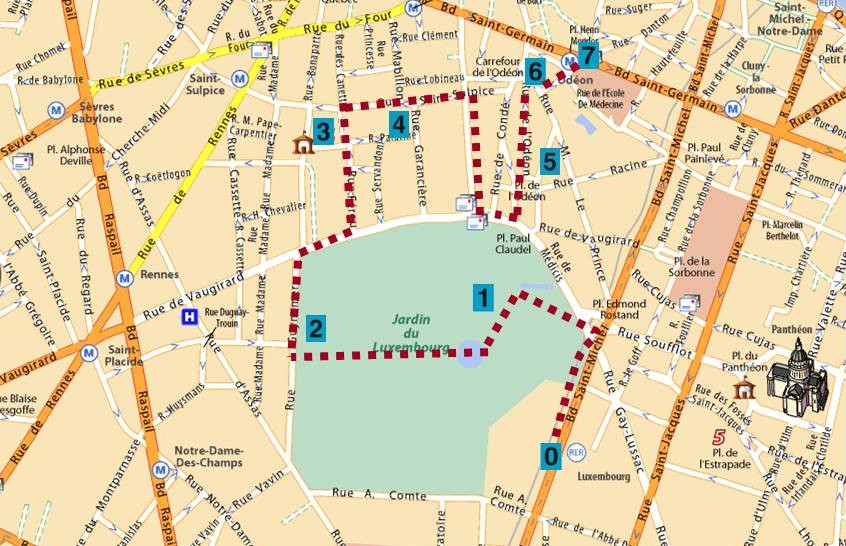 Recommended walking route in the Latin quarter and Luxembourg garden 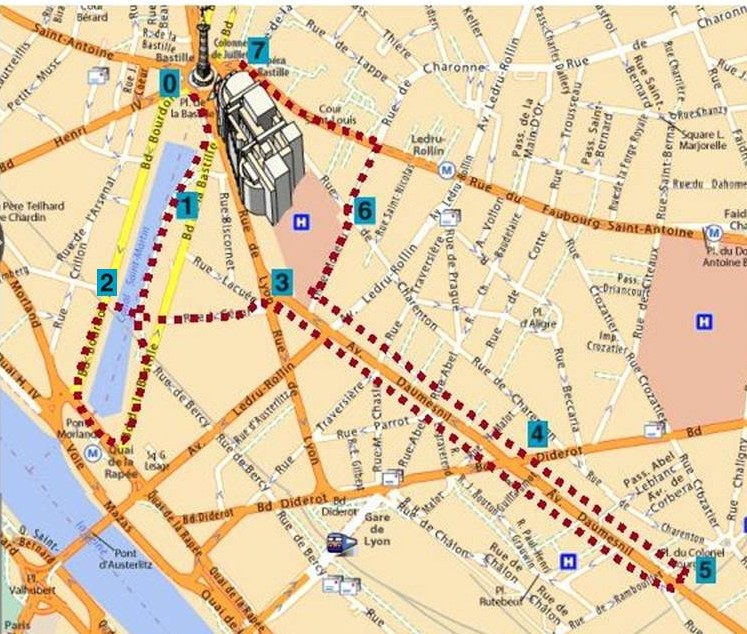 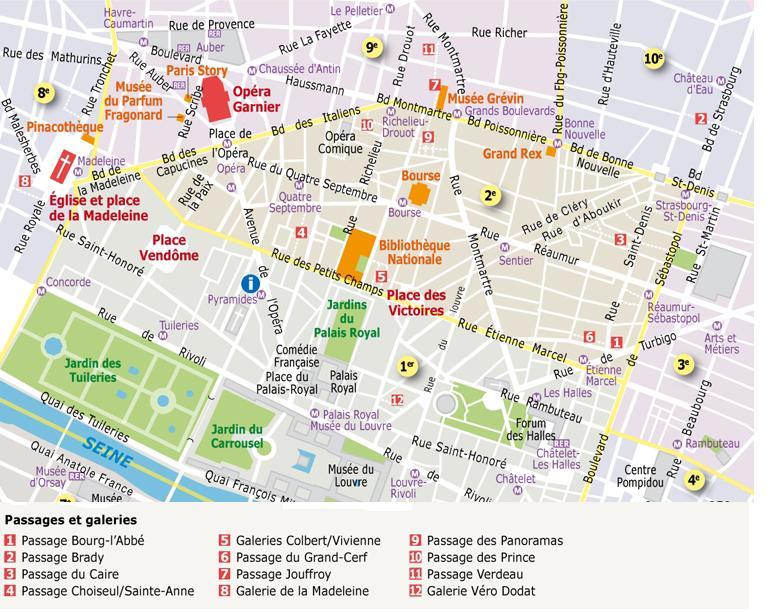 The area with lots of shops, galleries and shopping centers 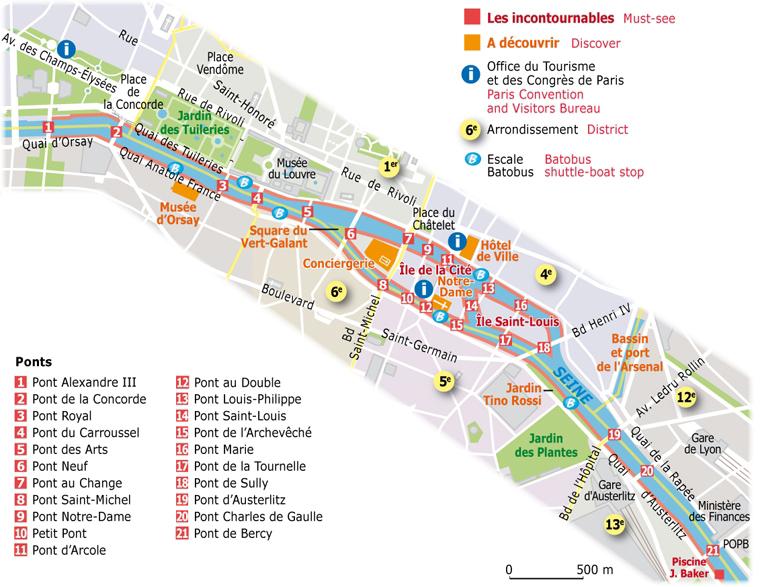 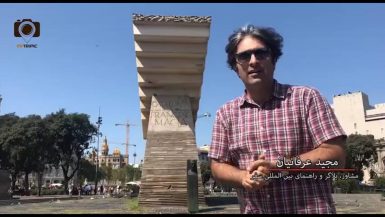 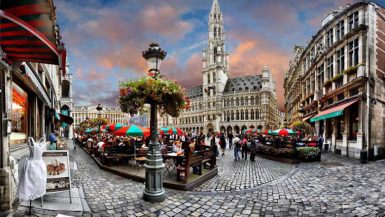 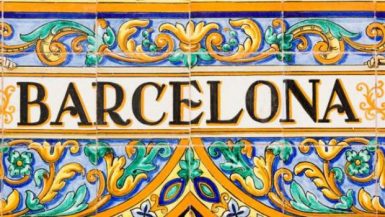